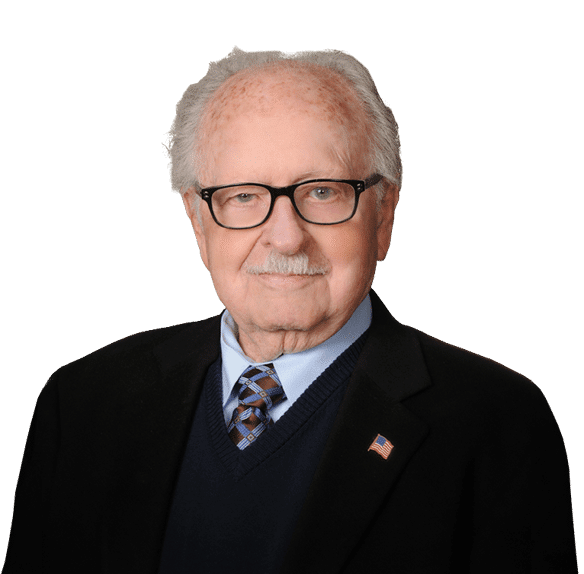 Mr. Owens has a wealth of outstanding educational achievement, business accomplishments, knowledge and hands-on trial experience for the solution of the legal problems of all the clients of Owens & Perkins, including many he has represented for over 40 years, as well as their children and grandchildren.

He was admitted to practice in the State of Oklahoma in 1949 and was promptly employed as a labor attorney with the Sinclair Oil and Gas Company in Tulsa, Oklahoma. He moved to Darien, Connecticut in 1959 for management assignments for the Sinclair Oil Corporation and its worldwide affiliates. He worked in Sinclair’s headquarters until 1966 when he resigned and relocated his family to Arizona and successfully took the Arizona State Bar Exam. In 1967, he opened his law office in Scottsdale, where he has been practicing ever since.

This is the background from which Mr. Owens provides the clients of Owens & Perkins the legal advice and guidance they request in regard to business and corporate matters, criminal problems and family relations, including bench and jury trials and proceedings before the Court of Appeals and the Supreme Court of Arizona, as well as federal proceedings. That’s over 60 years of knowledge and leadership for direct application to the courtroom – or in an advisory capacity to avoid the courtroom.

Mr. Owens had an extensive practice in Family Law and Criminal and DUI Law. His practice also included mediation and arbitration. Mr. Owens has always been family oriented and in 1996, with the pride he often expresses, he co-founded Owens & Perkins, Attorneys at Law with his granddaughter, Michelle J. Perkins, who is now his Managing Partner. He was admitted to practice in Arizona and Oklahoma and before the U.S. District Court for the Districts of Arizona and Oklahoma.